“Cat Five’s homes will have other advantages besides being able to withstand hurricane-force winds. For example, Hawes expects the utility bills on his own home to be cut in half, and termites, a perennial problem in the Lowcountry, won’t be an issue.”

In September 1989, Hurricane Hugo roared through Charleston, soaking and slashing its way through the city, taking the lives of 27 South Carolina residents, causing $7 billion in damage along the U.S. East Coast and temporarily making it impossible to drive from Mount Pleasant to Sullivan’s Island or the Isle of Palms.

Ten years later, with Hurricane Floyd menacing the U.S. mainland, South Carolina Gov. Jim Hodges ordered Charleston-area residents to leave their homes along the coast. Around 400,000 of them headed for higher ground, taking part in one of the largest evacuations in U.S. history and creating a mammoth traffic jam made much worse by a severe lack of bathrooms and hotel rooms along the way. For many motorists, the two-hour trip to Columbia took eight times that long. The category 4 storm all but bypassed South Carolina, causing heavy damage in North Carolina and points north.

A long list of other hurricanes have threatened the Charleston area since, and, each time a monster storm makes its way across the Caribbean, the specter of evacuation hangs over residents of the Carolina coast. Such trepidation will be a thing of the past if Ray Hawes has his way. Using technology his company, Rapid Deployable Systems, Inc., developed for its military and business clients, Hawes hopes to build homes in the Lowcountry that will stand up to the force of a category 5 hurricane or even a major earthquake.

“If you’re spending $6 million to $8 million to build a house, why not invest additional money to make it totally safe?” Hawes asked rhetorically.

Hawes, his son Geoff and their new company, Cat Five Houses of Charleston, have already built two homes in Mount Pleasant. About two years ago, Geoff’s house was completely remodeled to withstand 150-mph winds. An aluminum frame was built around the existing structure, secured to the ground and covered with a steel roof. Its exterior is stucco, though other materials, such as brick, could be used as well for the outside of the home.

“When it comes to upgrading existing properties, Cat Five Houses of Charleston offers a wide array of solutions ranging from a simple external framework bolted into an existing timber structure, which has minimal intrusion, to a total rework, complete with internal support beams,” Ray Hawes commented.

He and his wife recently moved into Mount Pleasant’s other hurricane-proof house, a modern, two-story structure with a huge storage area and garage beneath that overlooks Charleston National Golf Club. Other than the thickness of the walls, which are insulated between the interior of the house and the aluminum framing, it’s impossible to distinguish the home from one that might be blown away by one of the many hurricanes that threaten the serenity of the coast every year between June 1 and Nov. 30. 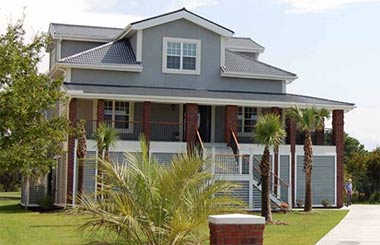 Both homes are a testament to Hawes’ theory that he can help design houses that are pleasing to the eye and at the same time wind-proof. He said Cat Five Houses of Charleston can work with an architect and builder to produce a house of any shape or design.

“We’re not going to be defeated by shape,” he said, pointing out that his company won’t be competing with builders but will be enhancing their work by producing the foundation and framework for hurricane-proof homes.

Cat Five’s homes will have other advantages besides being able to withstand hurricane-force winds. For example, Hawes expects the utility bills on his own home to be cut in half, and termites, a perennial problem in the Lowcountry, won’t be an issue.

“There’s no timber used in the house, so there won’t be any structural problems involving termites,” Hawes said.

He added that, for obvious reasons, homeowner’s insurance costs will fall and insurance companies will be less likely to cancel policies that cover hurricane damage.

“When the effect of a category 5 hurricane is seen on TV screens around the world, it will be comforting to know that the solution is readily available,” Hawes said. “The recent move by national insurance giants to simply remove hurricane insurance from existing clients tends to suggest that they, too, are aware of the huge losses they will undoubtedly face when a hurricane strikes. The Cat Five treatment not only will prevent such cancellations, it will reduce existing premiums and be good for the insurance companies, mortgage facilitators and banks.”

He pointed out that his building method, though ideal for expensive homes in areas such as Kiawah, can also be used to protect homes that aren’t in the seven-figure range.

“We can adjust to fit a budget,” he said.

He added that the same technology that will prevent his home from being destroyed by a hurricane also could be used in areas devastated by natural disasters such as Hurricane Katrina, which struck the Gulf Coast in 2005. He said permanent homes can be constructed quickly — a small team can put up a frame in one day — to house people displaced by hurricanes, tornados and other disasters such as earthquakes.

Charleston hasn’t been seriously shaken since 1886, when an earthquake caused $6 million in damage — in late 19th century dollars — and took as many as 110 lives. The quake is estimated to have been between 6.6 and 7.3 on the Richter scale. A typical Cat Five home would have safely resisted this earthquake, according to Dr. Timothy W. Mays, PE, a professional engineer who is also an Associate Professor at The Citadel.

“We calculate precisely how a Cat Five home would fail and why,” Mays explained. “We say a certain mechanism would have to happen for it to collapse. The aluminum frame is extremely light and extremely strong. For earthquakes, being light is what we want.”

Hawes built and lived in a house made of steel in his native England in the 1980s, but he didn’t patent the process. He’s been in business in the Lowcountry since the beginning of 2000, when he established Rapid Deployable Systems in North Charleston and started using aluminum and vinyl to build temporary structures that create a completely controlled environment for the Navy and other government and private entities. His method is patented in all counties that have signed the Patent Cooperation Treaty.

RDS’ efforts allow the Navy to work in a controlled environment to complete tasks such as laying non-skid surfaces on the decks of aircraft carriers and painting ships. The company also has played a role in building Boeing’s massive Dreamliner facility in North Charleston, constructing a building within a building so the aerospace giant could lay a thick concrete floor that otherwise might be prone to expanding and contracting.

For now, though, Hawes simply wants to show Lowcountry residents that they don’t necessarily have to run away from hurricanes.

“This is just me trying to prove a point, that we could build a house that wouldn’t blow over,” he commented.