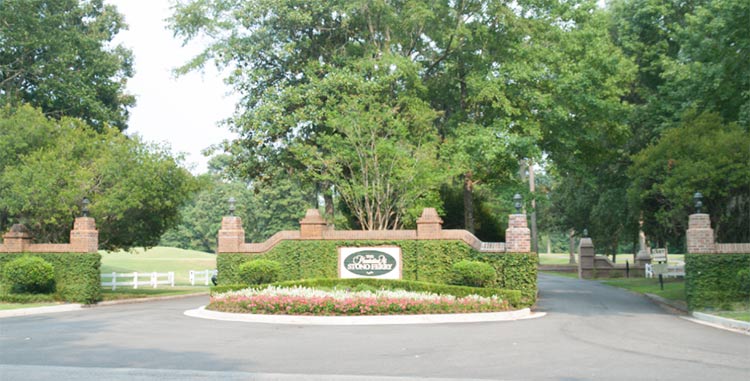 The Plantation at Stono Ferry is located in Hollywood, S.C. just 20 miles south of historic downtown Charleston. Situated on a gorgeous oak-studded bluff known as Point Pleasant, the community borders the Intracoastal Waterway along the Stono River. The first owner of record of the plantation property was James Beamer in 1682. A ship’s carpenter from Barbados, he was lost at sea in 1687 on a voyage to visit his homeland. His son, Jacob Beamer, continued to plant and farm the plantation after his father’s tragic death.

Almost a century later the Battle at Stono Ferry took place on June 20, 1779. This famous American Revolutionary battle was fought along the Stono River. The commanding officer for the British and Hessian forces was General Maitland, while General Moultrie led the American Patriots. The British and Hessian forces suffered 129 casualties, while the Americans suffered 153 dead or wounded. One of the American casualties was Hugh Jackson, the older brother of President Andrew Jackson. He died from heat exhaustion he suffered during the battle. Many historians believe Hugh Jackson’s death contributed to the disdain President Jackson felt toward the British. His ill feelings toward England played a big part in his presidency’s foreign policy.

Stono Ferry also played a part in the Civil War. The original Confederate commander of the Lowcountry’s coastal defenses was General Robert E. Lee. He established his command in the tiny hamlet of Coosawatchie, but frequently traveled up and down the coastline to inspect defensive positions including one at Stono Ferry.

A railroad line known as the Charleston and Savannah Railroad formerly occupied some of the land. The line was established in the late 1850s and was the main lifeline between these Southern cities. The rail line was finally abandoned in the late 1960s.

Between famous battles and historical events, Stono Ferry was used as a plantation raising various crops. The Ferry Crossing served area plantations in need of transporting goods and crops.

A Lifestyle Rich In Amenities

Stono Ferry is the home of the “Charleston Cup” steeplechase race held annually on the 2nd Sunday in November. The community also features a private equestrian facility for riding & boarding horses, and “The Links at Stono Ferry”, a championship par-72 golf course located along the Intracoastal Waterway.

According to Danielle Kenney a long time Stono Ferry Resident and Prudential Carolina Realtor, a number of incredible home sites with Intracoastal and marsh views are featured at Stono Ferry. The Plantation consists of 4 phases. The Estate Phase has 130 lovely home sites about an acre in size, which stretch along the Intracoastal Waterway up Log Bridge Creek and around the beautiful polo field and amenity area in the center of the development. Lots in this section range from $90,000 for an interior acre to over $800,000 for a home site on the waterway.

Phase 2 features 30 lovely marsh and 15 pasture homesites in and around the Equestrian Center. Many of these overlook grazing horses or lovely Log Bridge Creek, some have tidal creek water access. The lots range from $55,000 to over $200,000 for creek access. Stono Point, also in phase 2, has 8 lots, all 1+ acre in size.

Phase 3 consists of 135 smaller home sites situated around the beautiful “Links at Stono Ferry.” This is an exceptional “public” championship golf course. Lots range from $70,000 to over $200,000 for those overlooking the Intracoastal Waterway. The newest section of phase 3, Stono Links, has 27 lots capping at $70,000.

The most recent phase to open in Stono Ferry is Ironwood, an 80 unit, 3 bedroom 3 bath condo project; priced from $225,000. Most of the condos have golfing views and a ground level garage.