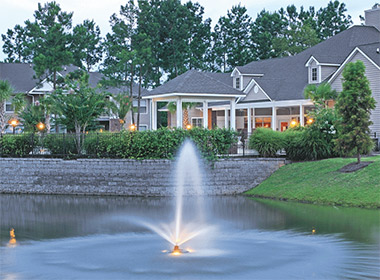 Goose Creek, South Carolina, located northwest of Charleston along the Cooper River and sandwiched between the towns of Hanahan and Moncks Corner, ranks among South Carolina’s larger cities, with a population of more than 30,000.

Although no definitive archives exist to explain the origin of the city’s name, historians suspect the winding, meandering curves of a nearby tributary of the Cooper, with its gooseneck bend, as the source for this unique and colorful moniker.

The first recorded inhabitants of the Goose Creek area were native Americans of the Etiwan and Sewee tribes, who at first welcomed the early settlers, teaching them how to survive the harsh conditions of the frontier. These English settlers arrived in the late 1600s from the island of Barbados, where they had accrued vast wealth by selling their plantations. The transplanted Barbadians followed the Cooper River in search of land worthy of financial investment and settled near current-day Goose Creek.

Goose Creek residents are uniquely positioned to take advantage of the very best offered by Summerville and downtown Charleston.

The Civil War brought great change to the area’s economy, which had for so long been based on slavery. By the late 1800s, most of the plantations were gone, and the Goose Creek area became a collection of small communities such as Grove Hall, Casey, Bowens Corner, Mount Holly, Back River, Howe Hall and Liberty Hall. In fact, Goose Creek isn’t even mentioned on the 1895 Rand McNally map of Berkeley County.

Only 10 miles from Summerville and 13 miles from downtown Charleston, Goose Creek residents are uniquely positioned to take advantage of the very best both cities offer.

With antebellum plantations and several wildlife refuges, including Goose Creek State Park along the Pamlico River Goose Creek takes great pride in its individuality, its independent character and its deeply-rooted Southern charm.